It all started in 1973: the soils, the vines, the grapes, and finally the wine. Working in harmony with our soils, the whole vineyard is cultivated by organic farming and we have now started our conversion to biodynamic practices.

For Paul, the eldest child in the Suzzoni family, the passion for winemaking started at a very young age, and he went on to study at the agricultural college in Borgo, in northern Corsica. With the support of his father Antoine, he bought a few plots of land and set to work. The dream became a reality.
Although most of the winemaking on the island at this time was just really dabbling around, Paul and his father planted their first Niellucciu vines in 1973 in the communes of Lumiu and Montegrosso, and vinified their first cuvées three years later.
Etienne, the youngest son, took over the domaine in 1986 after completing his studies in veterinary medicine in Paris. Passionate about the terroir and aware of the potential of Calvi wines, he invested in the domaine with the aim of expanding the total vineyard area. Today the domaine has over 64 hectares of vines, 12 hectares of olive trees, and has a herd of 40 cattle grazing over the 30 hectares of meadows and oak groves.
2016 marked a new chapter for the family-run domaine, with the arrival of Etienne’s eldest son, Paul-Antoine, who had the honour of vinifying the 40th vintage of Clos Culombu. 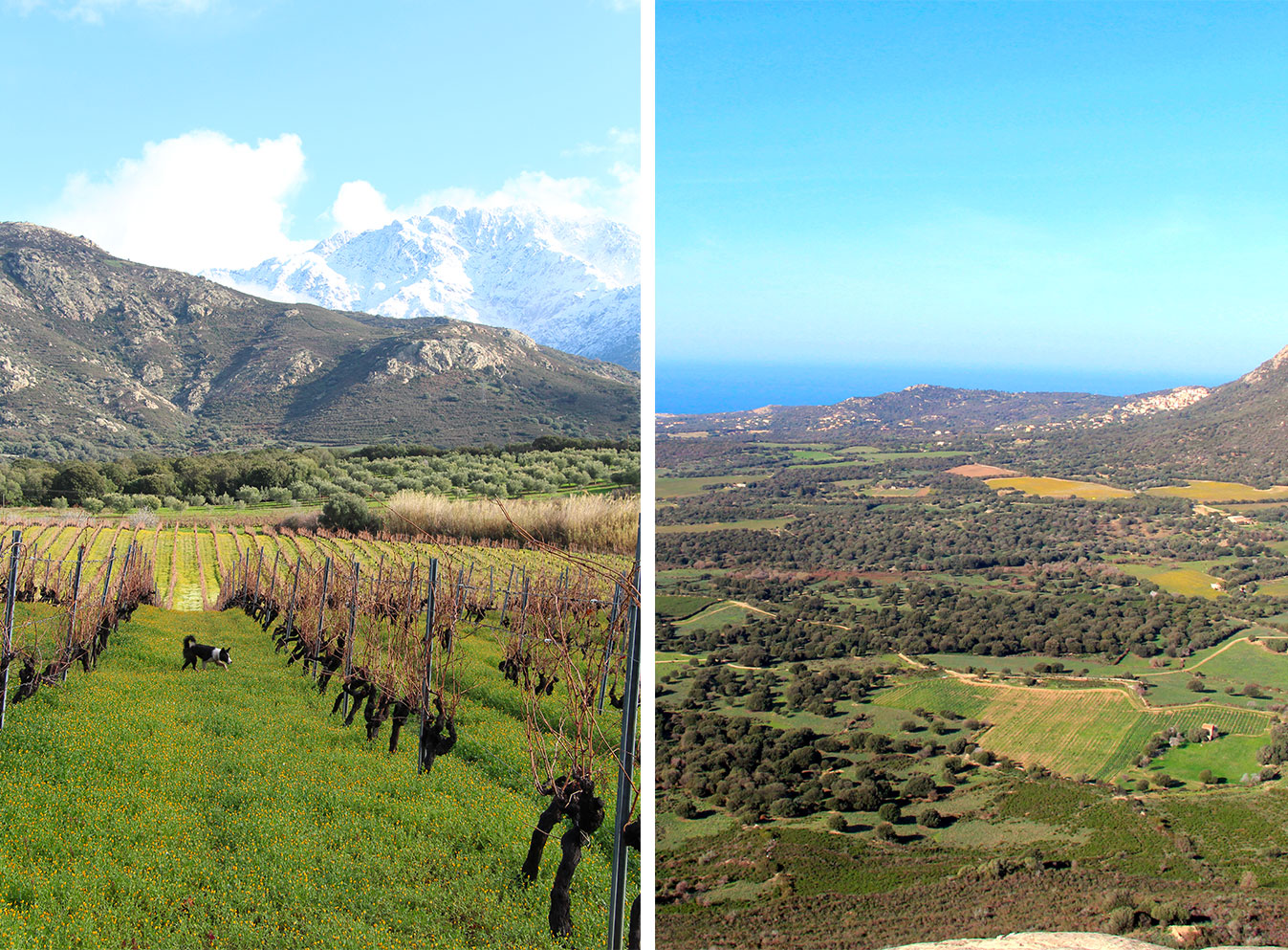 The French term terroir is used today to denote an essential component in the quality of all products of specific origin. It is a complex farming term, with several definitions. For us, terroir is a combination of factors that have been influenced by Man, for terroir can’t express itself in a wine without Man’s intervention.

It is a complex alchemy, with the following four key elements permanently in play:

It is through Man’s approach and the choices we make that we are able to create a product that expresses the terroir. The aim is to use wine growing and winemaking techniques to find the right balance between these different elements and create the purest and truest expression of terroir possible.

The vineyard is positioned entre mer et montagne – between sea and mountains. Vines, olive trees, oak groves and meadows create a patchwork of farmland of nearly 140 hectares. This vegetation takes root in monzogranitic soils made up of crystalline metamorphic rock with high silica content and rich in potassium, magnesium and manganese.
This terroir, typical of AOC Corse-Calvi, is founded on one of the oldest granitic platforms in Corsica (350 million years old). Over the millennia, a gradual breakdown of the rock has given way to sandy loam soils with contrasting textures and structures. You can therefore find extremely sandy soils in the foothills of the mountains, and increasingly loamy, sometimes even clayey, soils on the plains. Ancient clay-loam alluvial soils are also present, washed down from Montegrossu, the 1937m mountain that towers over the Bay of Calvi. 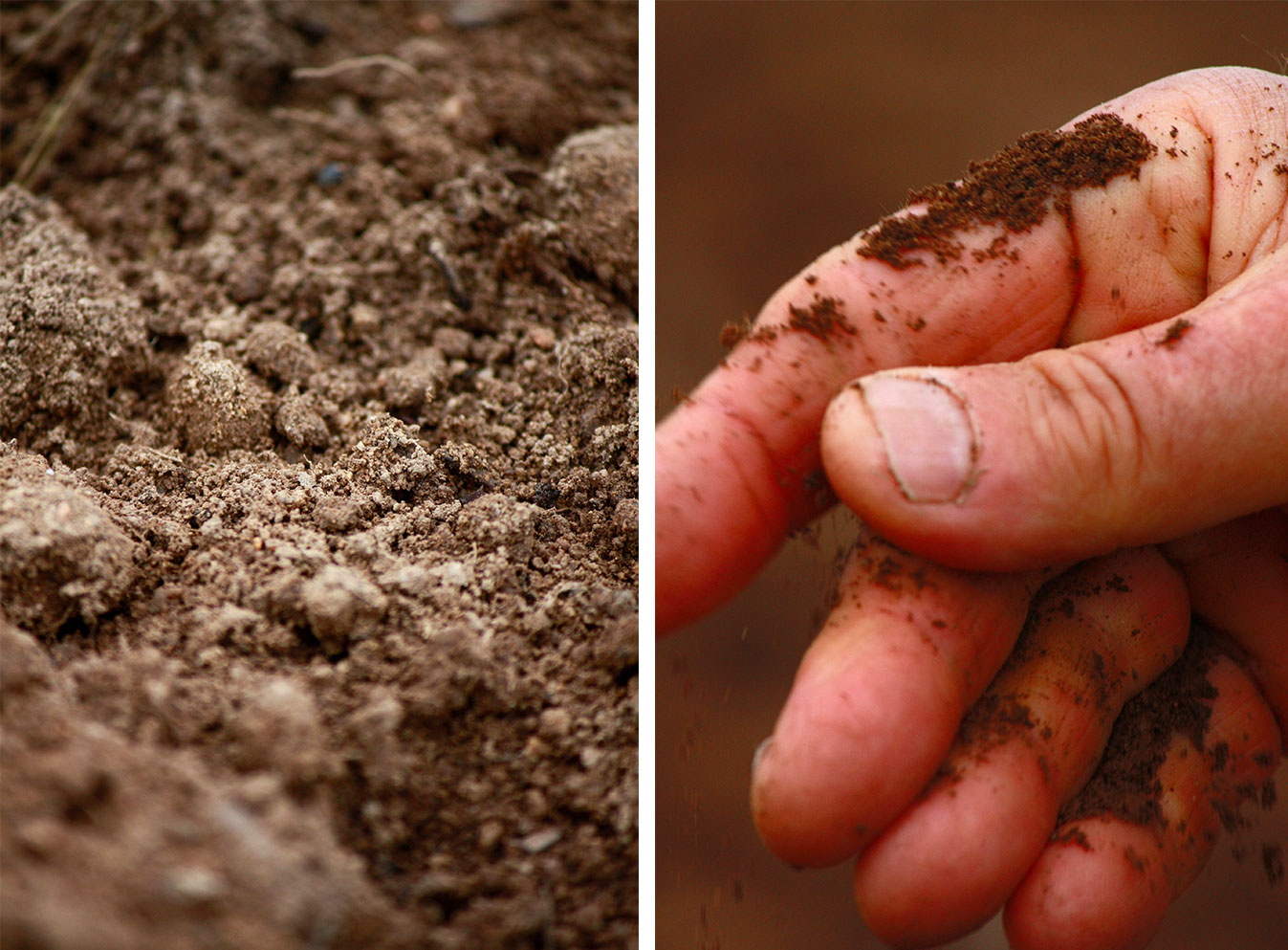 There are slight variations in the climate from one year to the next, even if seasonal patterns are relatively uniform.
The Gulf of Calvi is a drainage basin protected by the mountainous barrier of Monte Cinto and benefits from what is known as the ‘Balagne microclimate’. Corsica has many microclimates.
The climate here is tempered by the influence of the mountains and the sea, which also help limit the risk of spring frosts and hail. Winters are mild and wet and notable for the snowmelts which help replenish the water table in spring. The summers are hot, dry and windy, and therefore favourable for the cultivation of olives and vines, and they help reduce the risk of fungal diseases.
Despite these climate patterns, no one vintage is the same, and it is this that accounts for the richness and diversity of our work and sparks our passion.

We currently have 19 different grape varieties on the domaine: 65% red grapes and 35% white.
We believe strongly in the ampelographic diversity of our island and the extremely important part it plays in our heritage and our terroir. Niellucciu and Sciaccarellu are the main varieties that we grow over the whole of domaine, and make into both red and rosé wine. As for Vermentinu, this is the king of the island’s white grape varieties. Respectively, they represent 21%, 17% and 31% of the domaine’s total plantings.
Alongside these, and with the aim of reviving traditional practices of complantation, we decided to work alongside the Corsican centre of viticultural research, CRVI (Centre de Recherche Viticole de Corse), and plant over 10 forgotten varieties on the domaine in order to understand them and assimilate the winemaking methods necessary to make them popular again. This diversity is the main strength of the traditional island viticulture that we have committed to preserving.

Among the red grape varieties planted on the domaine, you will find:

As for the white varieties: 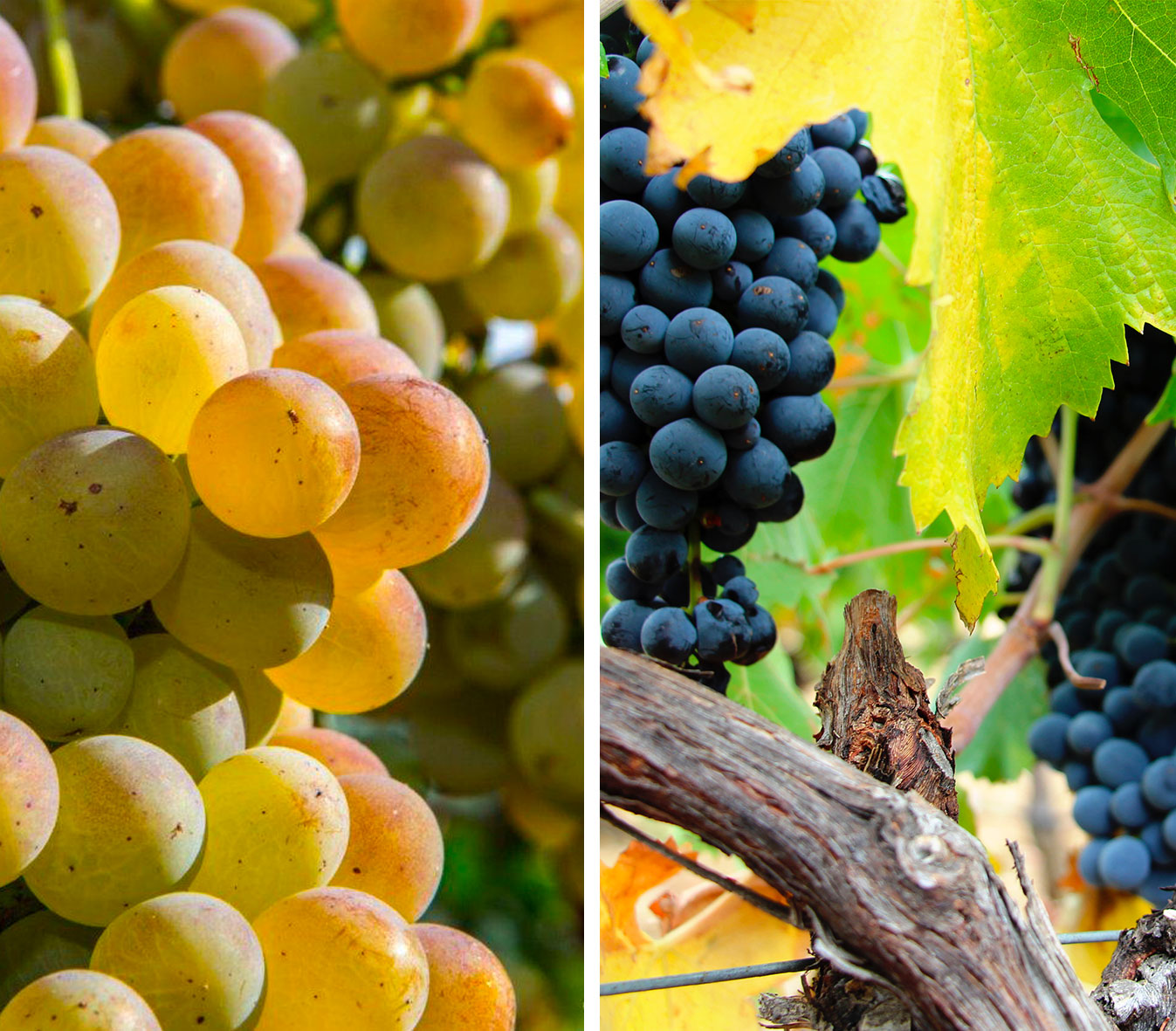 Since the beginning, the domaine has always been managed in an environmentally-friendly manner and worked without the use of weed killers, pesticides and other synthetic or chemical fertilisers.
We therefore decided to make this philosophy official by starting our conversion to organic growing in 2010. Three years later the whole of the vineyard was certified organic by ECOCERT.
Our desire to innovate makes us constantly question our practices, both in the cellar, with the use of the most suitable modern equipment, and in the vineyard, by favouring the natural balance of the ecosystem. We are aware of the numerous issues that we face and that affect us, including climate change, and this encourages us to adapt our methods and get as close as we possibly can to nature to respect her needs. We believe that replanting ancient grape varieties and adopting biodynamic practices are the most natural ways to respond to the issues of our times. Our philosophy is therefore very simple – it is to stay humble and to always do our best. 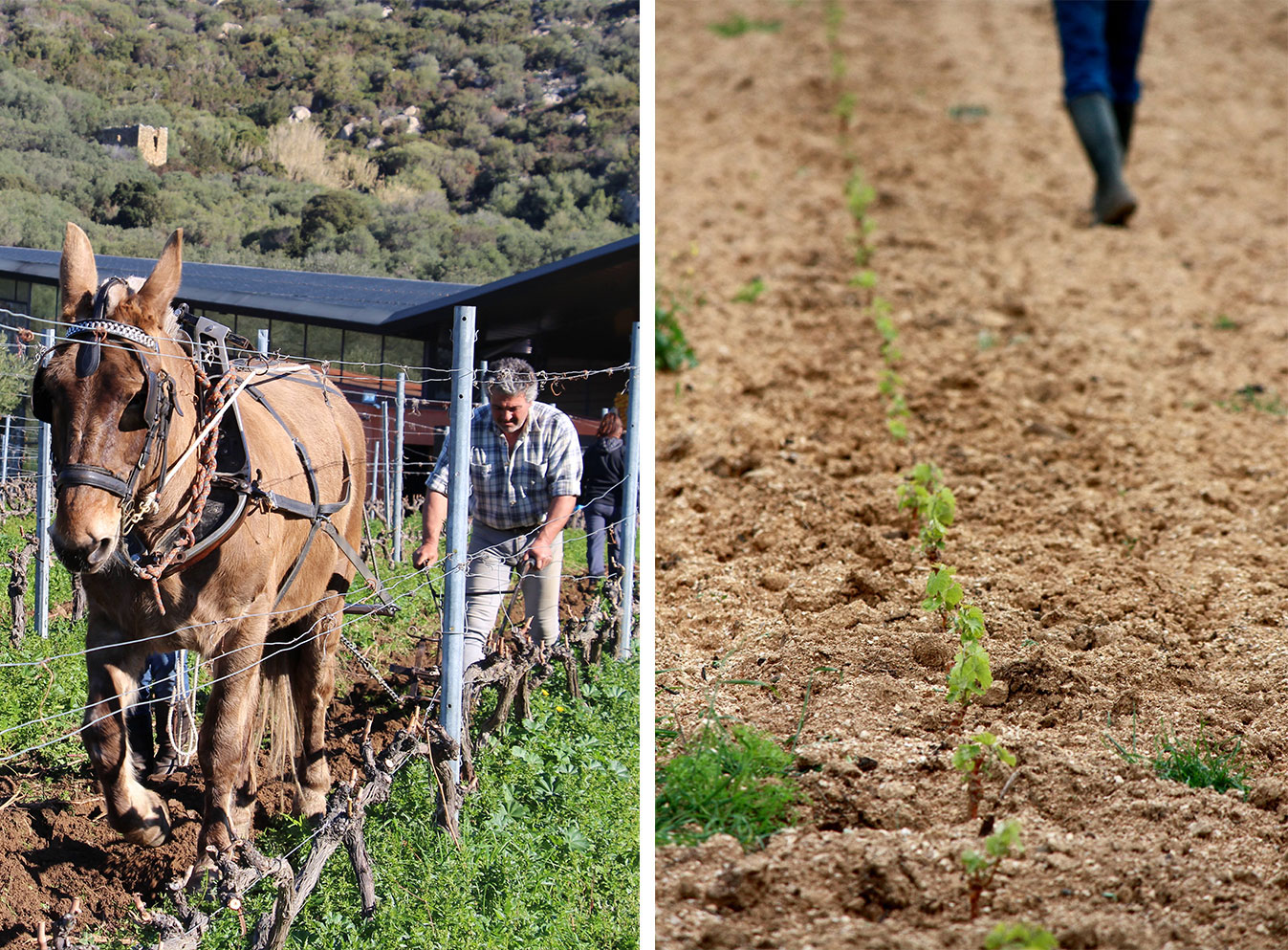 Work in the vineyards

Our vineyards, situated between 50 and 150m altitude, are made up of 27 parcels split between olive groves, scrubland and oak groves, which extend from the banks of the Fiume Seccu, ‘dry river’, to the slopes of the Capu Bracaghju hills. We have committed to questioning and constantly challenging the techniques we use to work the soils, and we try to adapt these to the different soil types found in each of our plots, as well as to the weather conditions of each specific vintage. The agricultural challenges of today and tomorrow are not the same as they were 50 years ago. We now face real environmental and climate issues, which are forcing us to experiment and adapt our production techniques.
The organic growing we practise on the domaine, as well as our conversion to biodynamics, encourages us to seek quality while respecting the natural rhythms of nature as much as possible.

Work in the WINERY

2010 was a year of pivotal change for Clos Culombu. The new winery was built: a simple vat room but kitted out with the best modern equipment and completely temperature controlled. The vat room, equipped primarily with stainless steel tanks, is the main area where the grapes undergo their transformation. Our more experimental wines are produced in Tuscan clay terracotta amphorae for the reds, and sandstone amphorae for the whites.
We also have a cellar for maturing the wine in 500l French oak barrels, which we use mainly for our Ribbe Rosse cuvée, a single plot selection of Niellucciu, Sciaccarellu and Vermentinu, grown on old clay-loam alluvial soils.
Since we started our conversion to biodynamic practices, we use the domaine’s indigenous yeasts to help enhance the characteristics of the terroir, and they are responsible for that marvellous transformation of grapes into wine.
Every year after the harvest, the winery is filled with a wonderful fragrance and it is then that we finally realise that the vintage is starting to take shape. 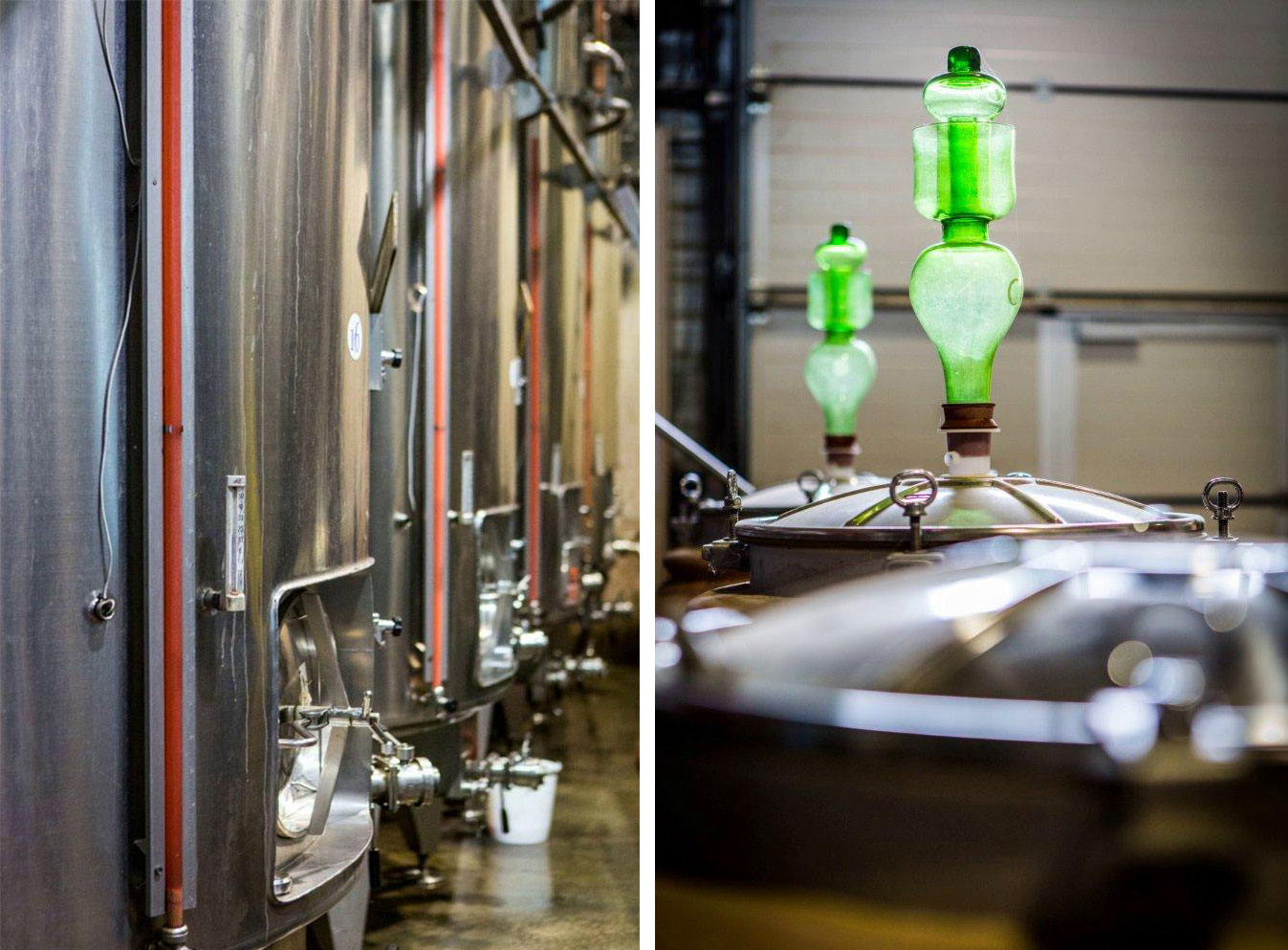